Q: As an executive producer, how do you approach the book from a visual point of view in order to appeal to such a wide readership?

RKL: One of the great things about returning to a series is that you know what the show is. When we adapted the first book, The Cuckoo’s Calling, a large part of the process was discovering what the show was. Our main job with the fourth book is to keep it fresh. Of course, the story is different in this book, which allows us some latitude in making decisions that weren’t relevant to the previous three.

With Lethal White, we dive into the world of Westminster politics, so a new world, and new territory for the director and the production designer to bring to life. But, as with the previous three series, we do stay pretty faithful to the novels. But Lethal White is a big book – the longest in the series so far – and part of the challenge of adapting is deciding what to let go of. There are threads of the story that Jo renders so brilliantly in the books that we reluctantly have to omit.

Q: Did you have to do any further research into the political worlds explored in Lethal White?

RKL: You always to try and represent the world as realistically as possible, which is why we bought in a location manager early on in the process, which afforded us the luxury of time in identifying what locations could work for us. We spread across three locations to capture a real sense of Westminster, not only its grandeur but also the day-to-day reality of working there as an MP.

Most MPs work in pretty basic offices. And there’s a mice problem! You’re welcome to that scoop. It’s just not as glamorous as the Westminster we see on the news. Of course, other shows have represented it very successfully, so we were able to go and pick other productions’ brains and ask, where did you use? What worked for you? That worked out pretty well for us.

Most MPs work in pretty basic offices. And there’s a mice problem!
You’re welcome to that scoop.

Q: Were there any challenges in terms of the shoot, and locations or specific scenes?

RKL: This book didn’t offer anything that felt particularly difficult or challenging. One of the most memorable locations was being able to take over a beautiful hotel for Robin and Matt’s wedding sequence. Having three days there allowed us to do a really good job of thoroughly covering those scenes. I think they feel extremely realistic. I certainly felt like I was at a wedding.

Most of the locations were relatively straightforward, but one of the hardest to find was Chiswell’s country estate. They searched pretty widely for that one, and, luckily, found a National Trust House that was slightly falling to pieces and perfect for the needs of that family: landed gentry who have run out of cash. The house had to feel a little bit tired. It needed its roof doing and other similar stuff that they couldn’t afford.

There are always challenges to shooting in central London, which is so busy that, even when you close off the street your characters are walking down, you’re always going to have police sirens and ambulances and the general hubbub of a busy city. Those are challenges that one faces but they’re easily overcome, so not too scary.

Q: How do you develop a complex plot like that in Lethal White, that incorporates so many different integral characters, for the screen?

RKL: We were fortunate to have Tom Edge back. He’s done two of the previous books, Silkworm and Career of Evil, and he understands the complexity of Robert Galbraith’s writing. The novels offer a rich cast of characters, and he skillfully manages the complicated plots in the books, striking the right balance, if you’ll forgive the pun.

We always kick off a year before we start filming with three or four days in a hotel, with Tom Edge and his excellent script team behind him, storylining the episodes. We’re in a room with lots of sticky bits of paper on the wall, moving things around, trying to get the balance of stories right. But Robin and Strike are at the heart of whatever story we’re telling, so it’s also about finding the balance of those characters. The audience loves them so much that everybody wants as much of them as possible.

There were a couple of challenges in that regard because when we meet them at the beginning of Lethal White, they’re a little bit distanced from one another. They’re perfectly friendly, entirely professional, but there’s a bit of a barrier there, what with Robin marrying Matthew and they’re not doing what they probably should do, which is be together. I’m not sure they know that yet, but we the audience can feel it.

Robin is investigating separately from Strike throughout large parts of the book, so the challenge for us was finding ways to bring them together. They work so beautifully together, and their chemistry is so palpable that we wanted to find ways of simply getting them in the same room. So when Robin goes undercover into the Houses of Parliament, for example, they have phone-calls or meetings-in-pubs to discuss new developments, gossip, and scandal. That brings them a little bit together.

Another challenge with Lethal White was adapting it to the form. It opens with a blackmailing story, but we don’t get a dead body until half-way through the book. You want to keep audiences hooked, but they have to wait until the end of episode 2 until we’ve got a knotty, juicy crime for Strike and Robin to investigate. But I think Tom Edge does it brilliantly and works really well with Jo.

Robin is investigating separately from Strike throughout large parts of the book, so the challenge for us was finding ways to bring them together.

Q: We see Strike and Robin’s relationship develop quite a long way in this series, can you talk about how their relationship has evolved?

RKL: Professionally, very well. Robin is a junior partner in the agency and has grown in confidence, so much so that she’s now investigating a case single-handedly, which is brilliant to see. But I think Lethal White is less about Strike and Robin coming together emotionally, and more about Robin struggling in her marriage to Matthew. She kind of needs to sort that out before she can move on to anything else.

You could say that Lethal White puts Robin’s experience front and centre, perhaps more than in previous books, as she focuses on dealing with a marriage she should never have entered into. She’s also suffering PTSD. She’s visiting a counsellor. She’s in quite a complicated place in this story. She needs to start resolving that.

In terms of his feelings for her, I’d say Strike is sort-of watching from the sidelines. He’s observing. He’s learning and in a sense, doing what he does so well. He’s a sensitive character, and he’s aware that things aren’t quite right, but as far as Robin’s concerned, he’s letting things play out.

Q: What is it about Strike that has fans gripped and keeps them coming back for more?

RKL: I guess it’s the magic of Jo’s writing.

Why do I love Strike so much? He’s just a perfect hero, isn’t he? Handsome in a completely unconventional way, strong and solid, but flawed, and that’s not even a reference to some of his unpleasant personal habits. Yes, he probably drinks too much, smokes too much, but while he’s the sort of man you wouldn’t rely on to have food in the fridge, you also know you can truly depend on him for the big stuff. You know that he does his job brilliantly.

Strike’ll investigate everything to the nth degree. He doesn’t miss a trick. He’s very empathetic, and he’s a great listener. And he’s sort of unattainable from a romantic perspective, so that obviously makes him all the more attractive. He’s got a great sense of humour as well. I think there’s something very human about it.

Why do I love Strike so much? He’s just a perfect hero, isn’t he? Handsome in a completely unconventional way, strong and solid, but flawed, and that’s not even a reference to some of his unpleasant personal habits.

Q: What do you think the future holds for Strike and Robin?

RKL: I’m not going to guess as to what the future holds. I have no idea what Jo has in store for them. I think we all hope they’ll get together, but there’s a part of me that wonders if they just shouldn’t. They work so brilliantly together, professionally, and if a relationship developed, it might compromise that. I’d hate to see their working relationship go down the drain because they’re both so brilliant at it. 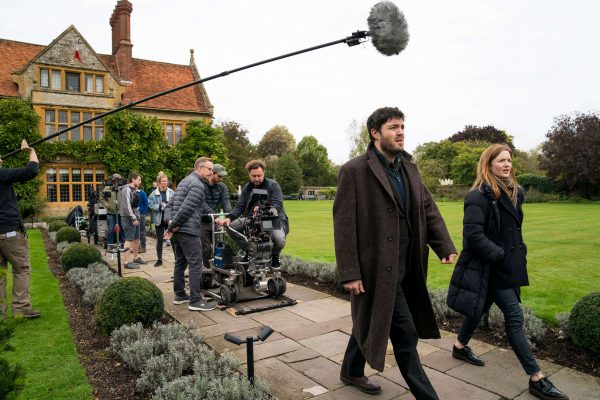 Get ready for Lethal White TV